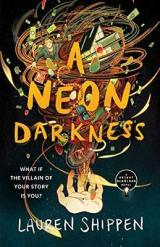 Robert is so beautifully fucked up, and I love it.

Somehow I didn’t really believe he would go that dark and quite in that way, even though it’s right there in the tagline. This story is delightfully sickening because Robert is so twisted up and so hurt inside, and he can’t stop hurting other people, and he’s unwilling to learn how to stop hurting other people. I’ll be a little spoilery here but I don’t know how to talk about this book without that, so here we gooooo

Robert has this underlying hurt that has haunted him for years, and it affects literally everything in his life. He has conceived of himself as a victim and the story he tells himself, the narrative he’s constructed so that he move past this hurt and live with it, relies on him being a victim. So even when he starts seriously morally shady stuff, he re-writes his actions in his head to fit the narrative that he’s already a victim and needs to be on the lookout for anyone who might hurt or abandon him.

Without being overly spoilery, I love the progression of Robert’s actions and how far he takes things, and if I read this book again, I’d bet my life that all the warnings signs are there.
I love the ending, as well. It felt so inevitable and so right, and I love love love the final line of the book.
(Sidebar, this really makes me want to listen to the Bright Sessions)

Read more of this review on my StoryGraph.